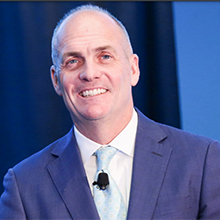 Justin Moore, PT, DPT, is Chief Executive Officer of the American Physical Therapy Association. Prior to being named CEO, Justin served APTA as its Executive Vice President, Public Affairs, and before that, served in several government affairs positions including work as the association’s lead lobbyist on Capitol Hill. He received his Doctor of Physical Therapy from Simmons College in Boston, his Masters of Physical Therapy degree from the University of Iowa, and his Bachelors of Science in Dietetics from Iowa State University.