Talk about timing: less than a week after the US Senate unveiled a health care reform bill that threatens to weaken required essential health benefits (EHBs) that include habilitation and rehabilitation, and just days before the Senate's 4th of July recess, a trio of coalitions brought its powerful message to Capitol Hill: don't make changes that would limit access to these areas of care. APTA is a member of all 3 coalitions.

Sen Tammy Duckworth (D-IL) was on hand to tell the story of her care and rehabilitation after losing both legs while serving in the Army in Iraq. She described the "excellent" care at Walter Reed Medical Hospital, and how, through taxpayer support of Veterans Affairs, she was able to receive rehabilitation and needed prostheses. She said that in subsequent conversations with nonmilitary people, she often was told how they were saving up so that one day they would be able to afford the care and devices Duckworth received.

"I realized how different the world was for people who have access to the care they need from those, who are the majority of Americans, who don't," Duckworth said. "And that's not right."

Roseann Sdoia, a survivor of the 2014 Boston Marathon bombing, echoed Duckworth's opinion on the importance of accessible rehabilitation and devices. She described not only the costs associated with prostheses, but the considerable time that must be spent in physical therapy and occupational therapy to learn how to live with the devices. "I wouldn't be able to use those devices if I didn't have the rehab that taught me how to use them," she said.

In addition to the briefing, coalition representatives, including APTA staff, visited 50 Senate offices.

"The briefing was an effective way to highlight the importance of habilitation and rehabilitation in health care, particularly in light of the debate now taking place over health care reform," said Michael Matlack, APTA director of congressional affairs. "But we aren't stopping there. APTA will be working with these coalitions to continue to deliver that message while Congress is in recess and after it returns." 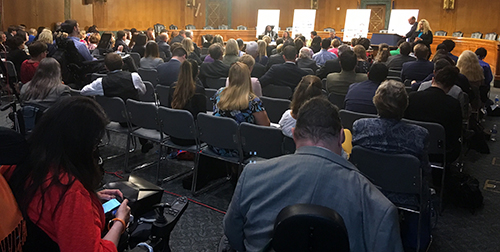 Geriatric hip fracture surgery patients who started PT services on the day of surgery or one day later also had lower mortality.