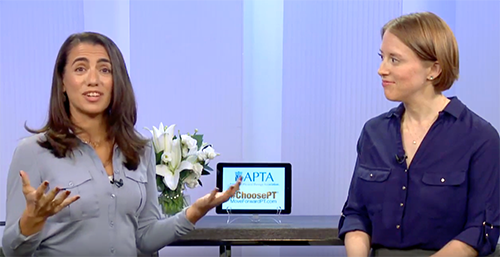 Sarah Wenger, PT, DPT, at left, joined Prevention magazine executive editor Sarah Smith for a live social media broadcast that looked at the #ChoosePT campaign and the role of physical therapy in pain management and other health issues. The interview was part of an APTA nationwide satellite media tour.

Don't touch that dial: thanks to a recent satellite media tour, APTA's #ChoosePT opioid awareness campaign and the physical therapy profession are receiving local media coverage in more than 30 outlets across the country. And that's not even counting exposure the profession received from a social media broadcast.

The "tour" involved linking up with TV and radio stations across the country to arrange for short remote interviews with Sarah Wenger, PT, DPT, a clinician and educator with extensive experience in working with patients experiencing chronic pain. Wenger, who was a panelist on APTA's "Beyond Opioids" Facebook Live broadcast in February, is also a board-certified specialist in orthopaedic physical therapy.

By the beginning of the tour day on September 21, 30 interviews were booked—18 for television and 12 for radio. The interviews varied but generally touched on #ChoosePT, the move toward nonopioid, multidisciplinary approaches to pain treatment, why physical therapy is a key player, and what patients can expect. A few were broadcast live, but the majority of interviews were recorded for later playback—meaning there's a chance you could hear an interview in the coming days and weeks. Check out this video of a live interview from Fox2 Now, in St Louis, for an example.

In addition to television and radio coverage, Wenger was also the guest for a 30-minute Facebook Live broadcast hosted by Prevention magazine executive editor Sarah Smith. That more in-depth interview allowed Smith and Wenger to discuss at length the more personal, patient-centered relationships physical therapists and physical therapist assistants try to build with their patients.

Wenger also explained the role of physical therapy in responding to patients in pain.

"The level of interest in the #ChoosePT message in the media is truly encouraging," said Erin Wendel-Ritter, APTA manager of media relations and consumer communications and organizer of the tour. "And we couldn't have asked for a better spokesperson for the campaign and the profession—Sarah handled every interview with enthusiasm and candor, and consistently made the case for physical therapy's role in pain management."

Want to keep an ear or eye out for #ChoosePT coverage in your area? Here's a list of the outlets and programs that recorded interviews for later broadcast (actual broadcast times not available):

A large-scale study found that the lowered odds are especially significant for "opioid-experienced" patients.

Five ways that PTs can help patients and clients who are taking opioids, or who are at risk for or already have OUD.

Researchers found that both physical and occupational therapy led to quicker discontinuation of opioids.