Register for APTA CSM by Nov. 3 for the best rates!

An educator, clinician, and health policy expert, Mathews-Gentry presided over the association during a period of expanded outreach.

Jane S. Mathews-Gentry, PT, DPH, DSc (hon), who led APTA as president during a time of increased outreach and inclusion, has died. She was 88. 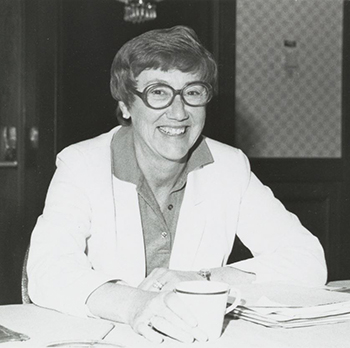 Born in Standish, Maine, Mathews-Gentry earned a bachelor's degree in physical therapy from Boston University in 1954, and both a master's and doctorate in public health from the University of North Carolina. In 1988, she was awarded an honorary doctor of science degree from the Philadelphia College of Pharmacy & Health Sciences.

Mathews-Gentry's career evolved from direct practice work to academia, where she served on the faculty of colleges and universities including Duke University, the State University of New York-Buffalo, and Boston University. Over the course of her career, she authored articles on a wide range of topics, including analyses of education and investigations into public perceptions of health care providers, as well as multiple papers on health policy.

An APTA member for 68 years, Mathews-Gentry served on the Board of Directors from 1972-1974 before being elected vice president in 1982. In 1985, she was elected president of APTA and served two terms.

During Mathews-Gentry's years as president of APTA, the association achieved significant milestones including the administration of the profession's first specialist examinations, the establishment of the APTA Minority Scholarship Fund, the creation of an affiliate assembly for PTAs in 1989, and the launch of the APTA Student Assembly.

Mathews-Gentry's leadership was marked by her deep commitment to others, a quality she demonstrated early on in her work with disabled veterans, and later, with the Idaho Dept. of Public Health, where she earned a pilot's license to allow her to fly a small plane to visit patients in remote parts of the state.

We honored our past, thought about our future, and had some good times along the way.

A View From the Summit: Physical Therapy's Promising Future

APTA's Future of Physical Therapy Summit offered inspiration — and a challenge to take risks that help the profession achieve its potential.