If you want to catch up with Bette Horstman, PT, MEd, you're going to have to work around her bowling league schedules (she's in two different leagues, so it can get complicated) and possibly a hair appointment, not to mention her volunteer hours with a local VA hospital, her pro bono work in her hometown, and, lately, her trips from Illinois to Washington D.C. for APTA's centennial celebrations and as part of a program that brings veterans to the nation's capital for visits to monuments and other attractions.

Other than that, her schedule's pretty much as wide open as any other 100-year-old physical therapist's. 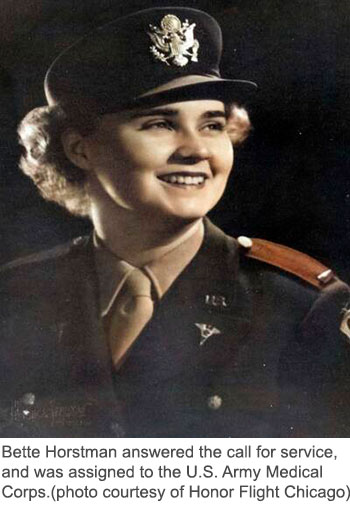 On Dec. 6, 2021, Horstman celebrates her 100th birthday, just as APTA closes out its centennial year. In many ways, she's the embodiment of what APTA's celebration of the profession is all about: commitment, tenacity, creativity, community — and no small amount of energy.

A long-time resident of Morton Grove, Illinois, northwest of Chicago, Horstman was born in Minnesota and grew up in Chicago, where she developed an interest in health care. During World War II, she began thinking about career paths. At the time, she didn't know that physical therapy was what she wanted — she just knew what she wanted to avoid.

"I became a physical therapist basically because I'm afraid of needles," Horstman said. "I wanted to be a doctor, but I didn't like the needles, same with nursing. But I knew I wanted to do something helping people, and none of the other careers like x-ray technician really appealed to me." She doesn't remember exactly how physical therapy appeared on her radar, but after she graduated from the University of Michigan in 1943, she was recruited to attend physical therapy school at the Mayo Clinic, in Minneapolis.

At the time, there was a significant need for PTs to help in the war and its aftermath. As a student at Mayo, she heard from a recruiter about that need and enlisted. After additional training in the U.S. Army Medical Corps and basic training, Horstman found herself assigned to Tripler General Hospital in Oahu, Hawaii. It was 1945, and according to Horstman, most of her time was spent treating prisoners of war captured by the Allies — primarily Italian and Japanese soldiers.

"The Italian prisoners were very difficult cases — absolutely no motivation to get well," Horstman recalls. "They didn't want to wind up back in service. In contrast, the Japanese prisoners, they just wanted to get back to it — they just refused to believe the war was over. "

During her time in the Pacific she was forced to "think outside the box," Horstman says, by training GIs in how to assist the PTs with patients. "Later on my profession woke up, and now we have PTAs," she adds.

After returning to civilian life, Horstman began providing physical therapist services in Chicago-area hospitals, beginning with Resurrection Hospital, a Catholic hospital on the city's northwest side. The transition from military to civilian life "was a snap," according to Horstman, who says her Mayo training gave her a leg up, and that hospital administration was supportive of physical therapy.

From Resurrection Horstman moved to other hospitals in the archdiocese's network. Eventually, Horstman found another need that she could fill.

"I became aware that after patients were discharged, in a few months they would come back and couldn't walk," Horstman said. "I met with the archdiocese of Chicago and said 'Look, you gotta train your nurses,' and they agreed and signed me on to start a two-week nursing program on the role of physical therapy."

That discovery of postacute care need eventually led Horstman to start up her own practice, which provided PT services to nursing homes. That was around 1972. She retired in the late 1980s, but not before becoming involved with the Illinois Chapter of APTA, where she served as president from 1968 to 1971, and with APTA national, where she co-chaired the planning committee that organized the association's annual conference in Chicago in1968.

At 100, Horstman doesn't show signs of a big postretirement slowdown. She's active in two bowling leagues ("I've got a 145 average — not bad"), provides pro bono services in Morton Grove, and participates in "No Patient Dies Alone," a program at a local veterans hospital that ensures terminal patients without family or friends nearby have someone with them in their last days. Her commitment to community service has been recognized in Morton Grove, where in 2020 they officially proclaimed Dec. 6 "Bette Horstman Day."

If that's not enough, Horstman also traveled to Washington, D.C., to tour the new APTA Centennial Center headquarters in September, and then a week later returned as a participant in "Honor Flight Chicago," a program that provides day trips into the capital for war veterans. The Honor Flight experience — a special project focused on women veterans — even earned Horstman a few minutes of celebrity, where she was interviewed for both Chicago-area and D.C. news reports on the event.

Horstman has witnessed plenty of change during her career and is glad to see that a few things about the profession have stayed the same.

"We're using machines more than our hands these days," Horstman said. "Machines to relieve pain and other things, but with less hands-on. In hindsight, it's good and bad — we need both. But let's not forget the basic hands-on part of our profession. Machines don't listen to patients. We have to listen to them."

But that, Horstman says, is where a key element of the profession has remained thankfully unchanged from her early years.

"Today's PT is just as aware of patients and their needs," she said. "They know they must talk to and listen to the patient. That hasn't changed."

As for advice for current and future PTs, Horstman thinks more training on administrative duties — topics such as developing budgets — couldn't hurt, but what she feels is truly important for the future of the profession is advocacy.

"Learn how to get involved with politics," Horstman said. "We need that involvement to sell our profession."

And through the lens of a century, Horstman offers what she believes is the most important advice of all for her physical therapy colleagues, no matter their age.

"Keep moving. Keep moving. Do something," Horstman said. "Volunteer in something. Stay active. And keep promoting our profession."

If you want to learn more about Bette Horstman, this biographic sketch from Honor Flight Chicago offers a deeper look at her military service and life afterward. 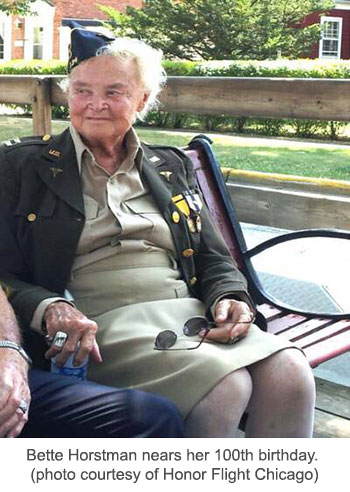