The 2021 Maley Lecture was a sobering look at what health care is getting wrong — and a hopeful call for PTs and PTAs to set things right.

If you're looking for subtlety, Tim Flynn, PT, PhD, FAPTA, is not your guy — at least when it comes to the state of health care today.

"Our society's beliefs about pain are killing us," Flynn said. "And the modern U.S. industrial medical complex has created, promoted, and sustained an epidemic in pain." 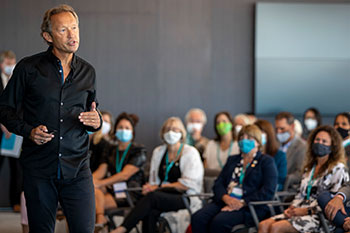 Flynn's comments were made during his delivery of the 26th John H.P. Maley Lecture as part of the association's centennial anniversary celebration Sept. 10-14. The annual lecture honors members who have made contributions in clinical practice and is known as a platform that encourages its lecturers to explore sometimes-edgy clinical issues. (The entire lecture is available for viewing on APTA's YouTube channel.)

The lecture was both a deconstruction of society's predominant approach to health care and a roadmap of possible paths for change. Keys to that change, according to Flynn, will be loosening the grip of a corporatized care mentality, and PTs and PTAs willing to make the fullest possible use of their skills and training.

Flynn began his analysis with a discussion of spine surgery for low back pain, arguing that there's little support that fusion surgery provides benefit for LBP, and that the approach doesn't even enjoy widespread agreement from surgeons as the appropriate response. Instead, he said, it puts more people at risk of chronic opioid abuse and surgery-related complications.

Flynn likened spinal surgery to lobotomies. "I think we'll look back much as we did with neurologist Egad Moniz, whose operation was considered, at the time, great surgical step forward, and say 'is spinal surgery for low back pain truly the lobotomy of our time?'"

Flynn extended his argument to ACL, meniscal, and other surgeries, sharing data from studies that challenged not only the procedures' efficacy, but their effects on overall health. Even MRIs weren't spared, which Flynn asserts are often not indicated and tend to produce  labels for conditions related to normal aging that trigger the response of the industrial medical complex. In the end, he added by way of example, patients who receive MRIs first rather than visiting a PT for LBP are six times more likely to have surgery, five times more likely to have an injection, and four times more likely to have an emergency department visit.

So why isn't physical therapy the go-to approach for many conditions? According to Flynn, payers have been incentivized to game the Affordable Care Act's cap on profits by, among other tactics, simply spending more on care, seeing to it that they don't exceed the 20% profit ceiling but netting more money in the end. Flynn sees this as an approach that's antithetical to the care PTs and PTAs provide. That's why the profession often feels shortchanged by commercial payers, he said — it's not an easy way to please boards and shareholders.

The dangerous health care pattern is also fueled by the pharmaceutical industry, according to Flynn, who said that as of 2011 36% of older adults are regularly using five or more medications or supplements, with 15% potentially at risk for a fatal drug interaction.

The toll has been particularly hard on older Americans, Flynn said, especially when it comes to injury and death from falls. Falls — often precipitated by the effects of prescribed medications — make up 91.3% of injury-related hospitalizations. The next highest injury source? Motor vehicle crashes, at 5.9%.

"Entangled" with the industrial medical complex, Flynn believes, is the agriculture industry, which has played a major role in the country's obesity epidemic and has been invested in chemicals that diminish diversity in the gut biome — a change that, over time, has helped to increase the prevalence of chronic conditions and autoimmune disorders. He said glyphosate, a widely used component in weed killers, has been running off farms into the major watersheds of the country, causing higher rates of cancers for those who live along major waterways.

Flynn spent the remainder of his lecture discussing what the physical therapy profession needs to do to turn the tide on these issues — mainly, to produce more PTs and PTAs who have a deep commitment to providing health care that actually keeps people healthy.

Education plays the critical role in this potential transformation, according to Flynn, but there are obstacles to be overcome: rising levels of student debt linked to lengthy degree requirements, clinical training programs that model themselves after physician programs right down to the size and feel of the facilities, and insufficient attention to ensuring that students themselves practice the healthy lifestyles that they'll be recommending to their patients.

Still, Flynn remains hopeful. That hope is rooted in the profession itself, he said.

And yet, he added, PTs are primary care providers with an important distinction. "We are not medical primary providers, and I don't want to do that, because we are in a failed system," Flynn said. "If we are going to continue to be at the altar of medicine, then I think we have failed our role to ourselves and society."

Acknowledging the profession's roots in World War I and response to the polio outbreak of the early 20th century, Flynn said that "we are once again called to lead in the midst of societal strife and a pandemic" where the only option is to act.