The Role of Therapy and Service Animals in Physical Therapy

As an adjunct to physical therapist interventions, a well-trained animal often can make a difference.

Carolyn Tassini, PT, DPT, is confident in her skills as a physical therapist (PT). Still, she says, she always welcomes a little help, and she really appreciates assistance from her friend Seamus. 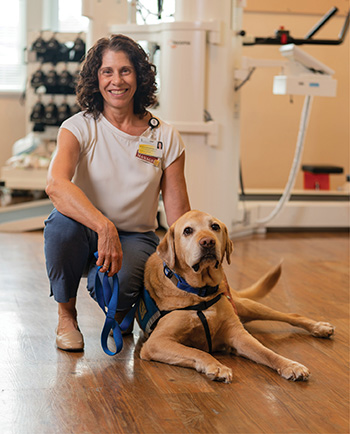 Seamus, she explains, is a highly trained therapy dog who's played a role in her work for the better part of 8 years. The golden retriever and Labrador mix was bred and initially raised, with the help of a volunteer, through Canine Companions for Independence (CCI), a nonprofit organization in Santa Rosa, California.

CCI matches most of its dogs with individuals with disabilities, but some, like Seamus, are trained as "facility dogs" and are placed with professionals in a variety of settings. Early in her career, Tassini worked on the neurology floor at Massachusetts General Hospital and watched as a woman with a severe brain injury emerged from an extended period of nonresponsiveness during a visit from a therapy dog.

A New Dimension to Physical Therapy

PTs and PTAs are exploring the uses and potential of 3D printing in clinical practice.

In Praise of Low-Tech Tools

In an increasingly technological age, mainstay items of physical therapy such as exercise balls, foam rollers, and elastic resistance bands retain their

The FDA generally regards oxygen to be a prescription drug.