We honored our past, thought about our future, and had some good times along the way.

The celebration of APTA's centennial, held Sept. 10-14, was about more than our history; it was about where we are today and the possibilities for the profession's next century.

Events such as APTA's Future of Physical Therapy Summit, and the McMillan and Maley lectures, were high points, of course, but they weren't the only sources of inspiration during the celebration: from tours of the APTA Centennial Center to a day of advocacy on Capitol Hill, it was a time to feel pride in what the APTA community has accomplished — and where we're headed, together.

APTA Centennial Center, the association's new headquarters, was the primary location for many of the activities on Sept. 10, including an open house with tours of the building.

An important stop on the APTA Centennial Center tour was the Physical Therapy Flex Space, a first-floor room with a wall screen and windows that let the community see in as well as offer users an outdoor view. The room can be configured for demos, fitness and other classes, local events, and presentations such as this video screening about the building's development and construction.

A highlight of the open house tours of APTA Centennial Center on Sept. 10 was a walk along the Community Wall, which features the word "COMMUNITY" behind colorful panels that evoke movement and are etched with the names of the thousands of people who donated at least $10 to the Campaign for Future Generations. 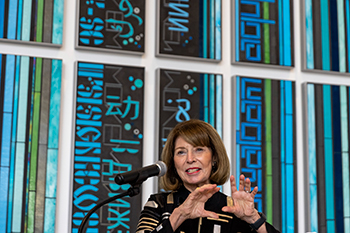 Marilyn Moffat, PT, DPT, PhD, FAPTA, speaks at a dedication of the Marilyn Moffat Atrium, named for her in recognition of her donation to the Campaign for Future Generations. Behind her is a wall sculpture, "Move," with panels that spell out that word in 10 different languages. Moffat is a renowned educator, author, and advocate, and namesake of the APTA Marilyn Moffat Leadership Award. 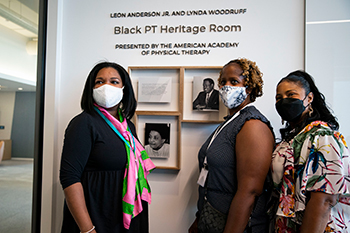 The Leon Anderson Jr. and Lynda Woodruff Black PT Heritage Room was dedicated on Sept. 10, recognizing Anderson, PT, and Woodruff, PT, PhD, two trailblazing members of APTA and charter members of the American Academy of Physical Therapy. AAPT donated to the Campaign for Future Generations in their honor. The second-floor conference room seats 20 or more and is used primarily for staff meetings and other APTA member events.

Stanley Paris, PT, DPT, FAPTA, speaks while Catherine Patla, PT, DHS, FAPTA, looks on during at the dedication of the Stanley Paris and Catherine Patla Conference Room on Sept. 10. The building's marquee event space is on the seventh floor, with windows facing north toward the Washington, D.C., skyline. The conference room has a capacity of 300 and can be divided into two smaller rooms. Paris and Patla are two of the profession's most well-known leaders.

Physical therapy alumni from Stanford University stand in the newly dedicated Catherine Worthingham Room, which is on the third floor of APTA Centennial Center. The conference room seats 12 and is used primarily for staff meetings and other APTA member events. Stanford alumni made a donation to the Campaign for Future Generations in honor of Worthingham, who was a longtime Stanford educator as well as a national icon of the profession. Here, Stanford alum Gail Jensen, PT, PhD, FAPTA, speaks about Worthingham's impact. 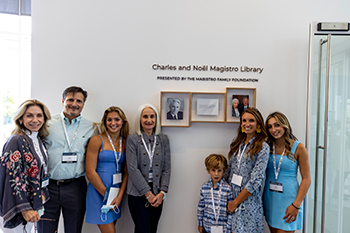 Family members of Charles and Noël Magistro stand in the library recently named for the couple. The library was dedicated Sept. 10, following a generous gift from the Magistro Family Foundation to the APTA Minority Scholarship Fund through the APTA Campaign for Future Generations. The first-floor library will display artifacts, historically relevant books, and tablets with interactive content. Charles Magistro, PT, FAPTA, was one of the most influential figures in the profession. 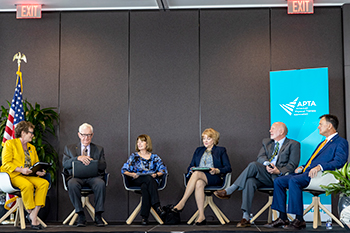 The first day of celebration ended with a centennial gala at the Washington National Cathedral. All net proceeds from the event are being directed to the Campaign for Future Generations, with generous gala sponsorships contributing to that effort. At right, a choir welcomes guests to the gala. 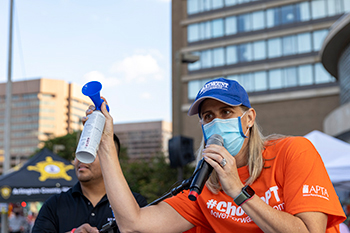 APTA Board of Directors member and Northern Virginia local Skye Donovan, PT, PhD, was the official race starter for the 20th annual Arlington Police, Fire, Sheriff and ECC 9/11 Memorial 5K Race, held on Sept. 11. APTA was the grand sponsor of the event and used the opportunity to connect with the local community, handing out ChoosePT cooling towels, shoelaces, pins, stickers, and educational information. 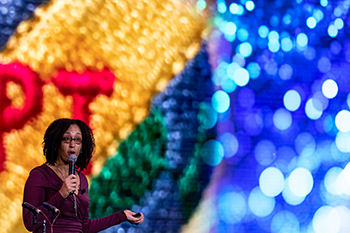 The APTA Future of Physical Therapy Summit was a daylong event that unpacked the association's mission statement to explore its component parts: building community, advancing the profession, and improving the health of society. Here, Jazmine Tooles, PT, DPT, describes Explore the Magic of Motion, a program she founded that helps children understand what PTs and PTAs do. 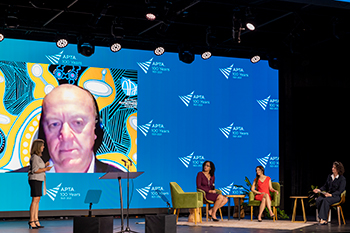 The summit combined keynote presentations with panel discussions that included participants from other parts of the world. In this picture, Scott Willis, BAppSC, president of the Australian Physiotherapy Association, joins the community panel onscreen. 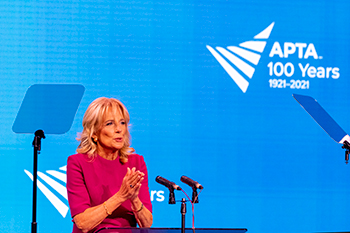 Amid all the activity around the centennial, the 77th APTA House of Delegates met for a productive session that addressed racism, DEI, PTA involvement in the association, COVID-19, productivity standards, and more.

The celebration ended on an appropriate note: advocacy for the profession. On Sept. 14, APTA held an Advocacy Day on Capitol Hill (and via remote meetings) that involved more than 450 PTs, PTAs, and supporters and generated nearly 300 meetings with members of Congress and staffers. 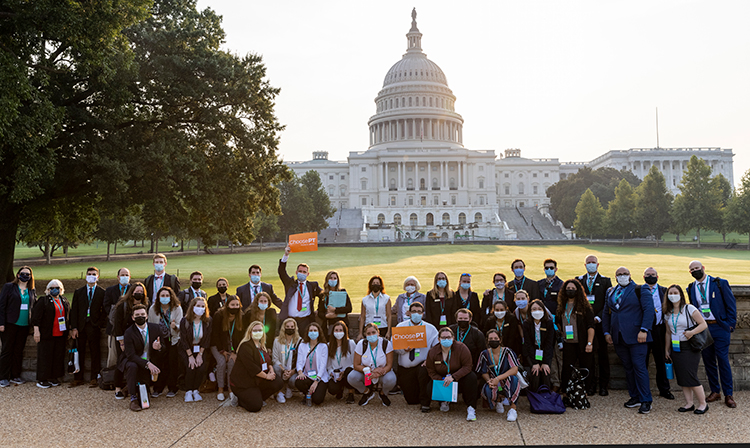 Blood was a strong advocate for PTAs, and a champion for the role PTs and PTAs can play in community service.

An educator, clinician, and health policy expert, Mathews-Gentry presided over the association during a period of expanded outreach.

A View From the Summit: Physical Therapy's Promising Future

APTA's Future of Physical Therapy Summit offered inspiration — and a challenge to take risks that help the profession achieve its potential.